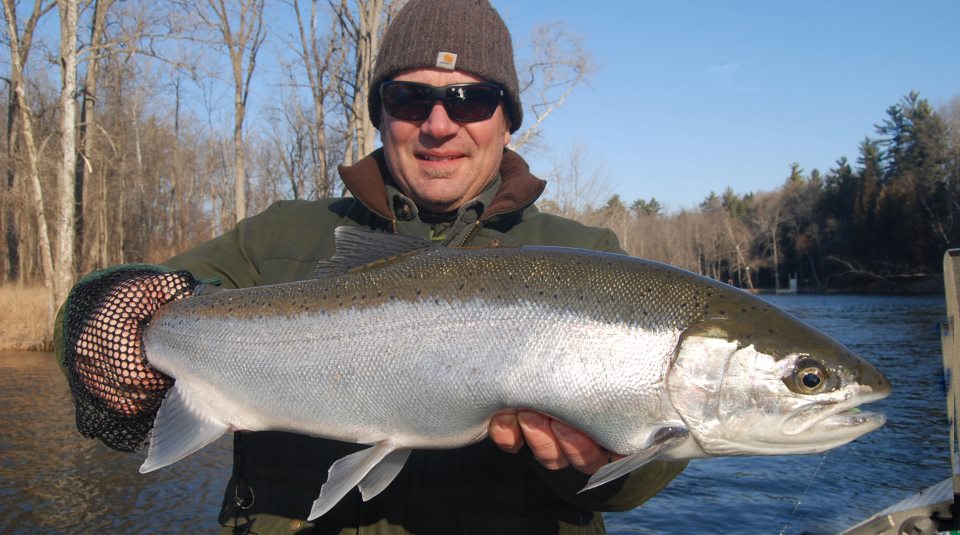 MUSKEGON RIVER STEELHEAD is the ultimate game fish and the crown jewel of Michigan Rivers. Steelhead are the only freshwater game fish that will strike a fly savagely in 35 degree water, leap relentlessly,
make blistering lightning quick runs, and test every fly fishing skill you possess. Like Salmon, Steelhead are born in rivers but spend their growing years in larger bodies of water. Our great lakes Steelhead return to the rivers when they reach sexual maturity after three or four years of growth in the big lake. After spawning commences in late spring Steelhead migrate back to the big lake and start the process all over again the following years.

These beautiful fish average 8-10 pounds with an occasional monster caught close to 20 pounds each year. Join us for an experience of a
lifetime fishing for one of the most sought after freshwater game fish in the world. These world-class fish are available in the fall, winter, and spring.

FALL STEELHEAD (October thru November) Fall Steelhead fishing is your best opportunity throughout the year to experience the true power these fish have to offer. These Great Lakes Steelhead migrate into our rivers in October following the migration of the Chinook or King Salmon. These bright silver bullets cruise behind spawning salmon redds in search of discharged eggs.If you truly want to experience Steelhead fishing at it’s best, join us for a fall Steelhead fishing trip. You will not be disappointed!

WINTER STEELHEAD (December thru February) Winter fishing for Steelhead is one the best kept secrets throughout the Muskegon river system due to numbers of fish throughout the river and you virtually have the complete river to yourself. Steelhead will ascend the Muskegon river all year long due to its warmer tail water and ice free flows providing for some spectacular fishing December through February.

Betts Guide Service prides itself on being able to offer you some of the best winter Steelhead fishing on the Muskegon. It has been common to experience double digit hook ups even on some of the coldest winter days.

If you have never experienced the sheer tranquility and peacefulness of winter Steelhead fishing on the Muskegon River, give us a try; it’s a great way to shake the winter blues in Michigan.

SPRING STEELHEAD (March thru May)

Beginning in late February, the winter Steelhead move up river and begin their migration to their spawning areas. During March, April, and May Steelhead begin to polish gravel and begin to spawn. During this time, Fly Fishing for Steelhead is at its best. Anglers
can visually seek Steelhead and make casts to the spawning Spring Steelhead. Sight fishing to Steelhead on gravel and watching them take flies makes for a very exhilarating experience.