When it’s  Steelhead fishing on your mind, the right way to go would be to know everything there is about the art. This ensures that you can make the best of your time while catching the biggest fish of the day. Steelhead Trout & Rainbow Trout belong to the very same species while sharing similar appearances.

However, when you study the Steelhead fishing reports thoroughly, you would come to know that there sure is a major difference between the two. The Rainbows are actually native to the Pacific Ocean tributaries with cold water while living and hatching at the same place all their lives.

On the other hand, Steelhead Trout are known to venture into the freshwater spaces in order to spawn & spend a good segment of their life living at sea. Steelhead Trouts mostly return to their exact birthplace for mating, which is known as anadromy.

When you are out fishing, here are some facts that you might love to know and add to your fishing experience.

1-Winter and Summer Steelhead are Different: 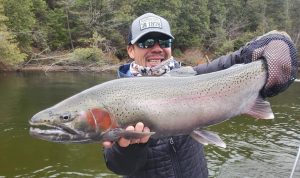 It sure isn’t a secret that the steelhead fishing world is flourishing with two distinct steelhead variants. They are appropriately termed as “summer-run” and “winter-run” steelhead. Now, it might be fair to presume that the winter-run fishes are known to enter the area’s freshwater during the start of winter months, with summer-run migration starting early in the start of spring & summer.

Starting early in the month of November & continuing through the month of May, the winter-run fishes are known to enter the purge through the system when it is relatively developed close to maturation. At this stage, their bellies have been packed; time scarce, as well as the attention, concentrated.

As the Steelhead enter the freshwater, they undergo a transition from the saltwater area to freshwater. However, the winter-run species have limited access to spawn timing before they are ripe for reproduction with eggs and sperm.

On the other hand, summer-run fishes start venturing into the freshwater at the start of April. They start entering in bulk as the warmer months start in and are done before November starts approaching.

Apart from this, you also need to keep in mind the fact that the sexual maturity of your summer fishes tends to vary substantially from the winter counterparts. The reproductive organs of summer-run steelhead don’t mature until they have transitioned from saltwater to freshwater. Harvested historically, it has also been documented that retained entrails of the steelhead weren’t actually immature, rather barren.

Further, mild weather along with comfortable temperature within the water body enhances the metabolism of the Summer Steelhead while their aggression tends to be too high. This is why the summer-run fishes are sought after by most angling enthusiasts.

Regardless of the differences amid their migration timings, both summer-run and winter-run fishes spawn early in the summer and spring.

2-Time-Management is the Key:

If you have fully understood the point explained above, you will surely relate when we say that timing is the key to it all. When you plan to fish and get a good result out of it, your timing must be right, or else you might not end up with a good catch or might have none at all.

The maturation of the fish drives both winter and summer fishes towards a set schedule of which one is surely laxer when compared to another. The winter fishes are all swollen & up against the clock set by Mother Nature close to the primarily dominating tributaries present within 100 miles of the closest ocean.

Both summer and winter Steelheads are known to survive as long as one year in the freshwater terrains without actually needing to feed in abundance. After battling through the long journeys & major obstacles, the summer-runs most often need an extra time allowance in order to ensure punctual arrival to the spawning beds.

The fish that venture further into the inland also need to factor in an increased presence of naturally occurring barriers that might or might not delay their travel. To get the best from the lot, time management sure is the need of the hour.

3-Otoliths are a Part of Steelhead Species:

Steelheads are known to have otoliths, also known as ear stones, located in their head right between their ears & behind the brain’s fleshy part. This solidified chunk of calcium carbonate is known to serve as an important segment of the balance and hearing system in the Steelhead fishes.

This chunk is primarily derived from the water & as the part grows older, there is a formation of new crystals of calcium carbonate that allows the trace water elements to successfully bind with the otoliths to help develop the layers.

With all these facts and figures known to you, we hope you have an amazing time fishing in the area of your choice and while you are at it, make sure you seek advice from your local fishing guide.

Are you in need of a reliable fishing guide service provider for an amazing fishing deal? If so, trust the services provided by Betts Guide Service. Our trained and experienced professionals know the right way to help you through the fishing process and make you better at the art with time. To know more about our services, give us a quick call at (231)-750-0673.